While we develop our Player, we often need to run games in the original engine. Under Windows, this is usually no problem, but under other operating systems only wine or a virtual machine can be used. 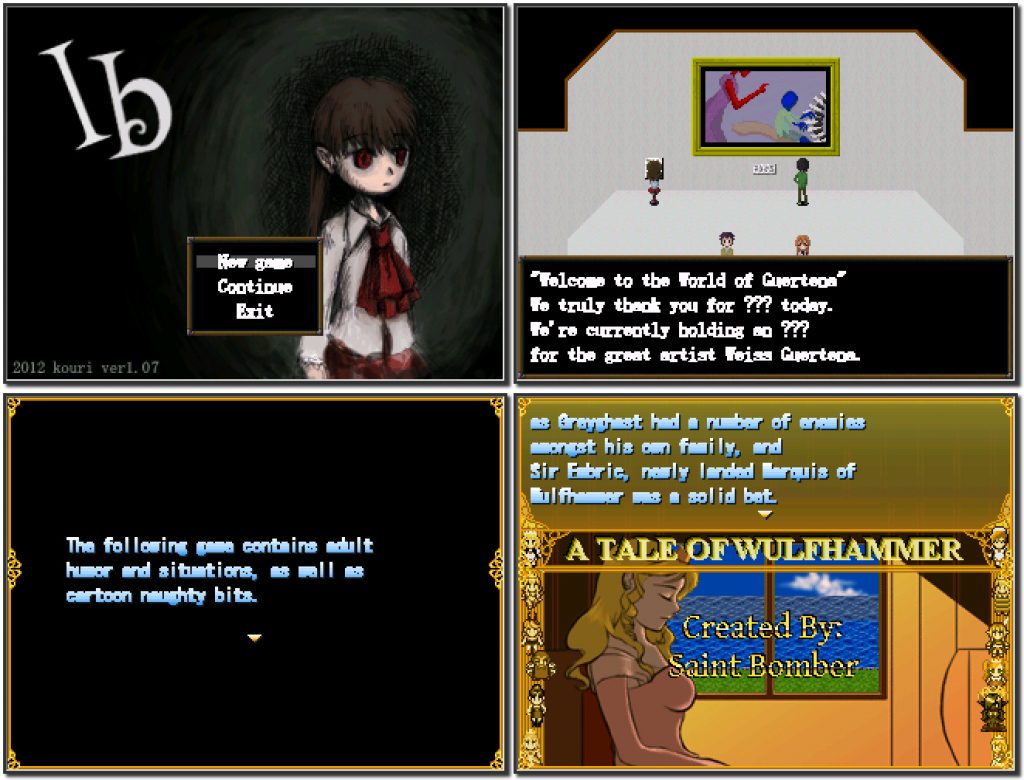 This seems to happen, because the font gets anti-aliased (a blurry outline is added) and then is rendered opaque. The solution is to not use wine’s font rendering.

To disable Render extension and fallback to native (i.e. fontconfig):

Create a fonts-noaa.conf file with the following contents, which overrides only the anti-aliasing setting:

Then launch RPG_RT with the font configuration overridden: 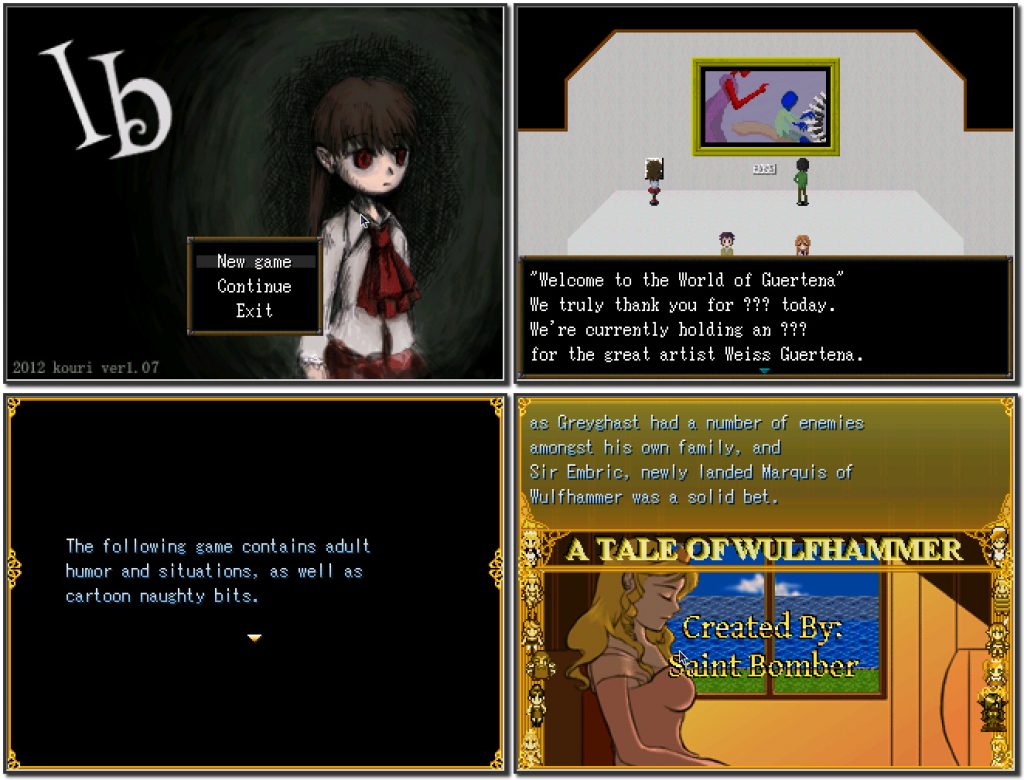 To make this easier I created a launcher script which does this automatically. You can find this script and the fontconfig configuration in this gist.

In case of music problems, which happened for me with MP3, the native libraries (libmpg123 via gstreamer) can be disabled and the original Windows decoder can be used.

To disable gstreamer for RPG_RT:

Then quartz and devenum are needed for media playback:

We continue our one release per quarter-cycle and release “Stimulant”. Besides initial RPG Maker 2003 1.12 support this is a pure bugfix release.

Unfortunately most of the issues cannot be illustrated this time, expect a less visual blog post than usual :(.

A few hours before release another regression was noticed which was introduced in 0.5.2 when placeholder support for the official RPG Maker 2000 English version was implemented: The actor name is shown by default in “critical hit” messages which causes grammatical errors. Because this is only a cosmetic bug and we are already in code freeze we decided to delay a fix to the next release.

A few weeks ago a new version of RPG Maker 2003 was released which heavily extends ShowPicture with new functionality like spritesheets and pictures in battle.

EasyRPG Player already implements most of the new picture features except pictures in battle and affected by Tone, shake or flash (#1273).

Additionally “This Event” can be used in Common events now. We support this now for all versions of the engine except for “Erase Event” because this event command results in a no-op instead of an error. We had to keep it disabled for old engine versions because this breaks games otherwise (#1265).

A look in the future

EasyRPG Player will come to two additional platforms: iOS and ChromeOS through a Chrome App. The Chrome app is mostly finished and the iOS app still lacks some parts of the GUI, especially the layout editor. We will announce when any of the apps is ready but do not expect the iOS app to be submitted to the App Store because the yearly fee is expensive and Apple will very likely reject us.

A virtual filesystem is under development, this allows e.g. running games from ZIP archives or games that are embedded in the Android APK. Together with the optional dependency PhysFS, more archive formats like 7zip will be supported, too. But due to solid compression (full decompression of one file requires decompression of additional files) RAR and 7zip will usually be too slow.

A visual error in El Heredero del Rey was caused by handling the character orientation after a page change incorrectly: When both pages contain the same default direction the current direction of the actor is not altered (#1226).

Battle2 animations (the large ones) were handled incorrectly. The original logic looked for a normal battle animation and afterwards for a large one but there is a field in the database which indicates if the large battle animation is to be used. This fixes a visual error after defeating the knife-monkeys in El Heredero del Rey and simplifies the code (#1234).

The elevator in HOME was not working. A workaround was to smash the enter button but the proper fix was to disable action events when an autostart event is pending (#1109).

The Violated Heroine became stuck when walking through the East Gate. This was caused by another timing issue: An event with a lower ID than the last running event started in the same frame instead of the next one (#1132).

Aurora Wing: did not continue after the first enemy turn.  Intro has a skippable hang and first battle gets stuck after enemy turn. The game checks if a variable contains 999,999 which is the maximum variable value in RPG Maker 2000. Unfortunately, our Player defaulted to the RPG Maker 2003 maximum 9,999,999. Resulting in the variable being higher than the game expected (#1002).

In the dungeon crawler 題名のない竜退治 the interpreter got stuck after collecting an item. This was caused by an “Erase Event” call in a map event that was called by a parallel process. The interpreter continues now correctly after this case (#1243).

Celestial Silfade Story (シルフェイド幻想譚) froze sometimes after using an attack command in the custom battle system. This was caused by a misalignment of the screen which was off by 2 pixels (#1064).

Additionally, this game uses timers to show the current time of the day. The rendering was off by one frame resulting in heavy flickering (#1245).

When the Teleport or Escape skills target an area instead of a map the area is replaced with the map it belongs to. This fixes the game DQ2悪霊の勇者・製品版ver1.50 (#1253).

The interpreter was not refreshed when a move route altered a switch. This fixes a cutscene in Desolate City (#1232).

Sound effects stop now when the Player returns to the title screen (#1147).

The background for battles started with the “Start Battle” event command were wrong when a random encounter happened before. This was caused by an incomplete variable reset when the former battle ended (#1224).

All RPG Maker 2003 backgrounds filled the log with “Image size out of bounds” messages because the check used RPG Maker 2000 background sizes which are smaller (#1223).

When switching back to Window mode under Linux the Window sometimes stayed fullscreen with the window rendered in a corner. This was fixed for the F4 and F5 case, but using your window manager to go to fullscreen and back still may not work as expected (#383).

When the screen was rotated while the Player was running in the background the viewport was partly offscreen after returning. This was fixed by updating to the latest version of SDL2 (#1185).

Deprecation of the Windows RT port

To make the Windows maintenance easier, we are going to switch to the vcpkg tool for compiling our dependencies after this release. This tool does not support ARM Desktop Apps which were required for the unsuccessful Windows RT. Therefore this will be the last version of EasyRPG Player that runs on the Windows RT platform.

UWP for ARM is supported by vcpkg, so if we ever release a Windows Store version of the Player, it will run on ARM, too.

The system graphic stretch setting (tiled or stretched) was not correctly restored from savegames created by RPG_RT (#214).

A bug in liblcf was fixed which resulted in corrupted LDB files (Stream read error). The error was quite trivial: We wrote one zero-byte too much at the end of the file… Now lcf2xml can finally be used to modify databases properly (#209).

The input/output API uses now C++ iostreams instead of filenames. This makes the library suitable for the planned Player VFS and will fix unicode related problems under Windows (#206).